From the report  of  the duke Yakov A. Kozlovsky,

submitted in 1798  to the Medyn lower public court. 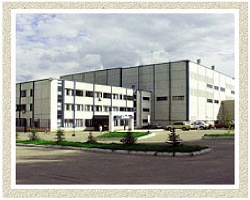 By the mid 1780-s Troitskaya paper mill was a large serf manufactory with an annual production of 12 300 reams of paper of various grades.

The mill had brick-wall warehouses with 5 stores for storage of rag materials and finished products, scoop room, sorting room where   paper was sorted, bent in sheets, trimmed and formed the reams. Production building included rolling, sizing, drying shops and the second sorting room.

In   1840-s the mill began retrofitting and modernization of production. Technical restructuring was completed successfully under the new owner - Williams Howard.

In the mill there were installed steam engines with capacity of 40 horsepower, rotating rag-digesters, the latest scooping machine. For the first time in Russia there was installed a special machine for paper sizing. In 1853, at the all-Russia international exhibition, Troitskaya paper mill won its first Gold medal.

Since the mid of the 19-th century the mill had been constantly upgraded and increased its output. In 1900 at the world exhibition in Paris the mill was awarded the highest award - "Grand-Prix".

Parchment production on Troitskaya paper mill started in 1887. Initially parchment was manufactured by hand, through immersing sheets of paper into a bath with sulfuric acid and then rinsing them with water.

The first parchmentizing machine was installed in 1899, the second one - in October 1909.

In 1947 the machines were upgraded, and in 1991 there was built a new paper and parchment mill with one paper machine BP-92 and two   parchmentizing machines made by company "Rauma-Repola” from Finland.

In December 2007 a new paper machine №2 was put into operation and first paper was manufacture on it. The machine is equipped with a system that enables   production of quality products in an automatic mode. Along with this there were built new manufacturing and warehouse facilities, which allow in the future accepting and process   doubled output.